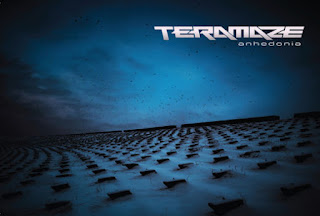 Several years after the release of their EP Not The Criminal, Australia’s progressive metal band Teramaze returns with their latest release Anhedonia.  And they do not disappoint.  From the opening of the title track to the last notes on the bonus track “Ever Enhancing II”, the band leads you through musical twists and turns that makes this album such a delight.

The album kicks off with the title track “Anhedonia”.  And with the first few notes, you can hear the refined sound that the band has.  The drumming and guitarwork is almost like a galloping steed.  When the vocals kick in, everything melds perfectly.  “Without Red Hands” jumps right in after “Anhedonia” and give you a kick in the pants.  It reminds me a bit of Believer’s Gabriel album – progressive with some speed.  It has a nice edge without going too far.  “Through The Madness” slows things down a bit for a nice mid-tempo song.  This particular song sounds a bit like Antithesis with the tight guitar/bass, the amazing drumming and the near-gritty vocals.  This is also the first song with a proper guitar solo section, which is pulled off superbly – flashy without being over-the-top. “Machine” is an interesting tune that’s really showcases the band’s progressive prowess – changing time signatures on a dime without missing a beat.  Quite the treat for any progressive metal fan. 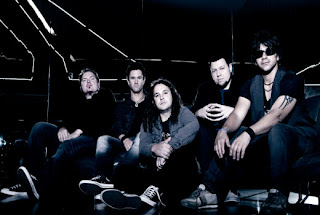 “Acts of Reparation” starts off with a solid groove that lays the groundwork for some great hooks.  The bass and drums provide a great backdrop for the guitar solos as well.  And the drumming even get a bit of the spotlight as well, which is well deserved.  “Fear of the Unknown” is another progressive gem.  The guitars on this track are just so well woven, moving in and out of various riffs while complimenting each other.  “Black Circles” keeps the progressive groove going with more time changes all throughout the song.  Brett’s vocals is a highlight of this song – switching between singing and near-screaming with ease.  Next up is “Proverb Le Jame”.  This song is more melodic that most of the other tracks but Teramaze pulls it off without any difficulty.  The symphonic parts just add to the appeal of the song and aren’t overbearing.  “Where The Dead Grow” is slower and more brooding than any other song.  It’s also the longest song on the album, clocking at just over 7 minutes.  It starts off slow and then gets into a nice mid-paced groove.  There are even some symphonic parts in the song, which gives it a nice variety.

“Egostatic” closes out the regular tracks on the album.  It picks up the pace again with the up-front guitar attack and the never-ceasing onslaught of the drums and bass.  This is another solid song performed with some tight musicianship.  “Ever Enhancing II” is the bonus song that closes the album.  It’s an updated version of their song “Ever Enhancing” from their Doxology album.  It’s an acoustical number with symphonic elements.  You can tell that this is definitely a very heart-felt performance by the group.

Overall, this is a fantastic album well worth picking up – whether you’re a progressive metal fan or not.  There are no filler songs and the musicianship of every song is spectacular.  All of the songs solid and stand on their own.  Some of my favorite songs from this album are the title track “Anhedonia”, “Without Red Hands”, “Black Circles” and “Ever Enhancing II”.  Be sure to get your copy to enjoy some great metal.
---